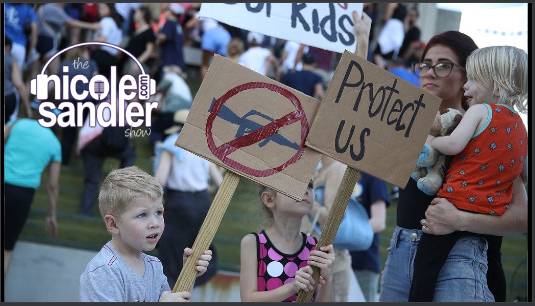 Nineteen 4th graders gunned down in yet another mass school shooting in America. The shooter used the mass shooters' weapon of choice, an AR-15, which is notable for the way the bullets shred whatever they hit on impact. Families trying to find out the fate of their children were asked to provide DNA samples because many of the bodies were so horribly destroyed that the faces are unidentifiable. But the Republicans in Congress don't think an assault weapons ban is a good idea. Today on the show, another group therapy session, because we need it. We'll check in at the top of the show with Tyler Pager who's leading the Washington Post's coverage of the White House response to yesterday's massacre in Texas. Then I'll open the phones for your thoughts on what we do now. 954-889-6410 or Skype to nicolesandler. I'm out of answers. And I already played Cheryl Wheeler's "If It Were Up To Me" at the end of yesterday's show...when I looked at my email and saw the death toll had been raised from 1 student (as it was when the show started yesterday) to 14. Sadly, when I awoke this morning, the number was 19. Nineteen kids and two adults, dead for no reason at all... We are seriously broken.