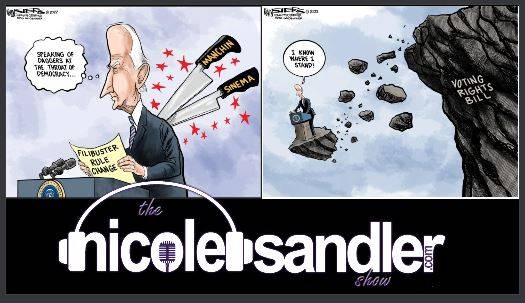 A change of plans today. If you were looking forward to John Hall's appearance on the show, we'll be rescheduling due to unforeseen circumstances. (How's that for cryptic? I'll explain during the show.) So, it's Friday, the end of another tough week for the Biden administration. Yesterday, I quoted Helaine Olen from a listserv we're on together, though I didn't name her. But the line I quoted was concerning Bidens falling poll numbers. Some of the list pointed the finger of blame at the mainstream corporate media. While I agree that their treatment of this president has been shameful, I don't think that's the cause of the downward spiral. Helaine wrote "It's that Biden comes off as ineffectual, probably because getting jerked around my members of your own party doesn't exactly scream effective. He campaigned as the guy who could get the Republicans to work with him. Whether he really believed it, or he said it because he knows voters like to hear it is now irrelevant. He's getting judged because ... surprise! ... he can't actually do that." Bingo! So that's our starting point. Helaine Olen writes a regular opinion column for the Washington Post. She's our guest today...