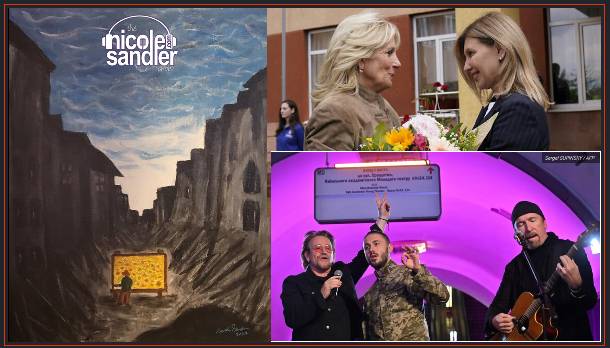 The news geniuses tied themselves in knots over the past couple of weeks, speculating on what Putin was going to do to commemorate Victory Day-- May 9-- which is today! The annual holiday is set aside to honor the victory over Nazi Germany in 1945.... It originated in the 15 republics of the Soviet Union after the German Instrument of Surrender was signed late at night on May 8, 1945. The breathless predictions were everything from "Russia will formally declare war" to possibilities much more deadly... Thankfully, none of that came to pass. Vlad did hold his parade and celebration on Red Square, but it was more subdued than expected. And when Putin addressed the nation, hackers changed the screens so they all read "On your hands is the blood of thousands of Ukrainians and their hundreds of murdered children. TV and the authorities are lying. No to war." On the other hand, Pres Zelinksy walked through the city of Kyiv while delivering his speech. Plus First Lady Jill Biden, Canadian President Justin Trudeau both visited, and Bono and The Edge played a mini concert on a subway platform, assisted by Ukrainian rock star Tomas Topelia of Antytila....