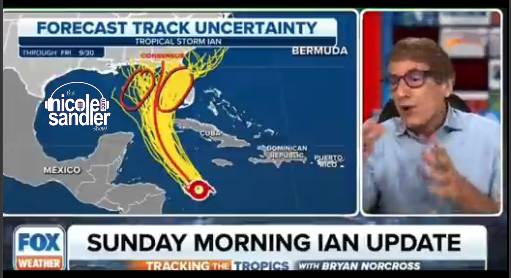 Lucky is not a word I'd usually use to describe my situation, but this time, I'll make an exception. I'm very lucky not to be in the direct line of Hurricane Ian. The photo on today's show card is of the guy who became a South FL superstar during Hurricane Andrew. Most who experienced that storm first-hand credit Bryan Norcross for getting them through that terrifying night, myself included. That's why that picture of Norcross' coverage of Ian is so shocking... Today, I was prepared for the Jan 6 committee hearing, which was canceled thanks to the storm. So I'll share some things I've been holding on to for lack of time. Today, we have time. So we'll hear Merrick Garland's speech to a group of the US's newest citizens, we'll try to figure out why anyone would vote for Herschel Walker, and further make a dent in the file of sound and video I've been compiling but haven't had time to play. And yes,. the phone lines are open, especially if you're riding the storm out.. 954-889-6410