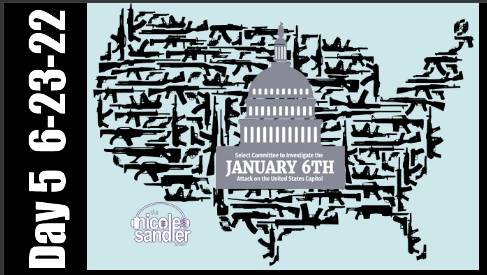 Well, we knew it was coming. The Supreme Court is finally handing down its decisions in the remaining cases from this term. They disposed of five this morning, will release a few more tomorrow, and finish it off early next week. Among the cases are a few biggies, and they announced one of them today. In NY State Rifle and Pistol Assn v Bruen, this illegitimate Supreme Court just overturned New York's law against concealed carry unconstitutional, thereby giving Americans license to carry guns anywhere they want. Truly frightening, especially coming so soon after the recent round of mass shootings. And their decision on Roe v Wade is coming within the next week or so. Lucky us! But today, the fifth day of public hearings put on by the House Select Committee investigating the 1-6 attack on the Capitol is scheduled to begin right around 3pm ET. This show goes live at 5. We'll carry it live, either for the whole hour or until they adjourn, at which time we'll talk about it. Again, lucky us!

PS Well, the hearing ended at 5:30, and I didn't have Howie ready to go today. So, instead I pulled out an interview I did back in 2014 with Tim Fisher, former Deputy Prime Minister of Australia who helped push through reasonable gun control laws there following their one and only mass shooting. Since the Port Arthur Massacre and the new gun laws Fisher helped pass, there hasn't been another one since. We could learn a thing or two from them!