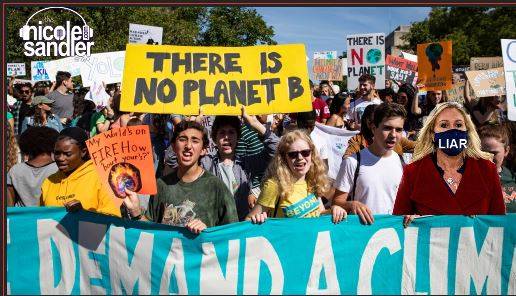 Today is Earth Day. To mark the occasion, I'll speak with author Eugene Linden about his new book, "Fire & Flood: A People's History of Climate Change 1979-Present". If we had enacted any of the legislation and protections proposed in the Green New Deal, we'd be in a much better position regarding the fate of the planet than we're currently experiencing. Unfortunately, today we've heard too much (but nothing of substance) from the other kind of green.. .Marjorie Taylor Green to be precise. She was on the stand today in the hearing to determine whether or not she should be allowed to be on the ballot. Challengers are citing Section 3 of the 14th amendment, which says that any elected official who takes an oath to defend our Constitution and then engages in insurrection is barred from holding public office again-- the Insurrectionist Disqualification Clause. Of course, this Green says she doesn't remember anything. I wonder if she has some kind of brain damage that's wiped her memories. Either way, she's unqualified to serve in Congress.